The Rwanda Cricket Association (RCA) is the official governing body of the sport of cricket in Rwanda. Its current headquarters are located in the capital Kigali. The RCA is Rwanda's representative at the International Cricket Council (ICC) and is an affiliate member and has been a member of that body since 2003. It is also a member of the African Cricket Association.

The History of Cricket in Rwanda 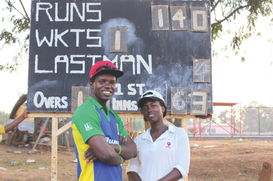 Way back in early 2000, the idea of starting the game in Rwanda was hatched by some of us who had tasted the joys of the game while in exile. So when we were in national University of Rwanda, the dream was translated into reality. because the game did not exist before, we had to start from scratch. We were however lucky because there was a family of Asians were playing social cricket in the backyard of their factory and when we contacted them, they welcomed us with open arms, giving us a soft landing. Eventually, we got in touch with the British Embassy who helped us a lot in the early stages of setting up the game, especially by providing the equipment. The Indian community was also very instrumental in putting the game at the pedestal.

So from the humble beginnings, from the humble number of seven and with no place to call home of the game, we started recruiting housemates, course mates and friends, Three clubs were formed, one in Butare and two in Kigali, after which we contacted the Ministry of Sports  and in December 2000 we were recognised by the ministry as a federation, hence the 10 years we are celebrating this December 2010.

Over the years we have been able to grow tremendously, for we have been able to increase the participation base as well as taking the quality of the game to a greater horizon. In June 2003, we were recognized by and got the affiliation status to the International Cricket Council (ICC) The world governing body for the game.
﻿
There are now 11 clubs in the league. We have 14 schools playing cricket, with a women's league, and different age groups are categorized in; Under 13, Under 15, Under 17 (all boys) and Under 19 (boys and girls). There are also teams for senior women and senior men. In line with the growth of the  game at an impressive speed, we have been able to have a big score at the regional and at international level. The senior team has been ranked in the 3rd round sport which we gained in Malawi in 2009. The juniors have probably enjoyed better success than their elder counterparts. Our U19's, just recently were runners up in the African tournament held in Swaziland, which has been a highlight of our regional and international performance. The U15's have also continued to stage impressive performance in the region. So at the age-group level, the success has certainly been encouraging.

Such success are attributed to a well structured development program, that starts with primary pupils and follow them through to secondary, University and beyond. We therefore have a steady source of talent that, eventually, feeds in the national team. We also have a well developed coaching program where we even carry out the coaching of coaches, done twice a year- the beginners coaches and refresher coaches. So, some of the coaches with accreditation from the World Cricket Council are attached to schools. We, as well, have a fully fledged office and paid permanent staff, who take care of the day to day activities of running the game in the country.

Our biggest financier up to today is the International Cricket Council, who give us an annual allocation. They do finance our activities after considering the efficiency in which the game in the country is run and the accountability of every penny they so offer. The Africa Cricket Association gives us a lot of support as well. the Ministry of Sports, the National Olympic Committee as well as local stakeholders and partners have all given us support to change the face of cricket in Rwanda. Sulfo Rwanda Industries, the sponsors of the national league for the last seven years have greatly contributed to the growth of Cricket. The schools league is sponsored by the Social Security Fund of Rwanda and FINA Bank whereas the women's league is taken care of by Computer Point. So our partners and stakeholders do really get value for money by associating with specific products that suit their services.

Our biggest challenge right now is lack of facilities- we do not have cricket grounds, which has been a major impediment to taking the game to greater heights. The ground we use belongs to Kikukiro College of Technology (KCT), and we are using it on a temporary engagement. The cricket equipment or gear are also quite expensive. So we have some working relationships with some international player, mainly from the United Kingdom who come in handy, donating to us some of the equipment we use. The cricketers with out boundaries, especially, have been of great value, for they mobilize their friends and other friends of Rwanda in the UK to donate and ship that equipment to Rwanda.

At the moment, we are at an Affiliate level (among the top Affiliates in Africa), but two years from now we want to get the Associate level. The difference here lies in the grounds that the country has, the tournaments played and and the quality of cricket played at home. So, we aspire to become one of the leading cricket forces in the region. With our development program and clubs structure, we shall get there. Its an exciting time to be celebrating ten years of growth, and our theme "Growing with every step" could not have come at a better time. Every step means a lot to us. We want to move along with everybody- partners and stakeholders- as regards nurturing the game of cricket. We are in the process of developing our new cricket home and our ultimate intention on this is to develop one new ground every year. This we shall do with the support of the cricket fraternity.
Powered by