Only one spot was up for grabs and it was taken by Swaziland. Rwanda won three and lost three matches to finish in third position with nine points, three behind winners Swaziland.

Swaziland won the tournament to earn a place in Division 2 with twelve points and a superior +1.403 net run rate over Sierra Leone who also amassed 12 points but had an inferior +0.729.

After recording three wins in four matches by Sunday night last week, Rwanda needed to book a win against Swaziland and Sierra Leone in their final fixtures to be assured of qualification.

To the contrary, Rwanda lost the two matches. The team lost by six wickets against Sierra Leone [124/5 against 108/7] before losing to eventual winners Swaziland by 34 runs [132-9 against 98-All Out].

Gambia were fourth after managing a win and losing five times to secure three points.

Rwanda’s Eric Dusabemungu Hirwa was the second overall MVP with 90.44 points behind Haris Rashid, from Swaziland, who secured 108.69 points from six matches. 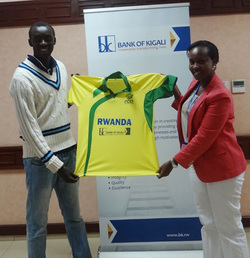 Rwanda Cricket Association has received a boost worth Rwf2.4m from Bank of Kigali to facilitate the national team.
The sponsorship is mainly targeting the men’s national cricket team ahead of their participation in the 2014 ICC Africa T20 Cricket World Cup Qualifier to be held in South Africa from March 22-25.
The Association chairman, Charles Haba received the package from Bank of Kigali delegation led by Chief Finance Officer, John K Bugunya and the Head of Corporate affairs Dr. Shivon Byamukama.
“It’s a great honour for Bank of Kigali to be associated with Rwanda Cricket and we look forward to promoting the fast growing sport,” said Dr. Byamukama.
The Rwanda national cricket team will compete against Gambia, Sierra Leon and Swaziland.
“Swaziland poses the greatest threat of all the teams but we have been well prepared and hope to win the tournament,” said team captain Eric Dusingizimana. 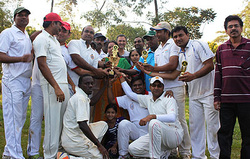 CHALLENGERS CRICKET club reigned over their counterparts Telugu cricket club to retain the VR Naidu T20 Cup which climaxed on Sunday at Kicukiro cricket grounds.
Challenger CC’s chase of 122 runs to beat Telugu CC wasn’t possible until the last over.
Probably the best game that Telugu has played, they bowled well, fielded well and batted well.
Needing 9 runs to win in the last over, Feroz Shaikh brought joy to the team after edging two fours that won the game.
Challengers captain Srinath Vardhineni admitted it was a tough game but the best team won.
Challengers CC have now won back-to-back titles. Eric Ndangamyambi was declared man of match after picking 2 wickets and scoring 43 runs.
In the women category, White Clouds lifted the title after beating Kigali Angels.
After winning the toss, Kigali Angels batted poorly losing their star players Sarah Uwera and Diane Ishimwe cheaply and this led to a low score of 67 all out in the allotted 20 overs.
White Clouds won the game with 5 wickets to spare, thanks to Vestine Byukusenge who made the highest contribution with the bat with 20 runs.
White Clouds captain Mary Maina said, “It was generally a very good performance. Our bowlers stuck to the plan which eased our win.”
The Rwanda Cricket Association president Charles Haba thanked the Naidu family and congratulated all the teams for participating.